I have two complete and utter obsessions lately that, no matter what, I can’t shake. One of them is rewatching all three seasons of Arrested Development (ILLUSIONS DAD! THEY ARE ILLUSIONS!) and the other is cilantro. I mean I’m SERIOUSLY addicted. But I guess having an addiction to a show and a spice is better than say, crack cocaine or meth right? I mean, that’s a plus side? Last week I satisfied both of my addictions by eating an entire family size helping of this spicy cilantro rice while watching (and quoting with a mouthful of food) season one of Arrested Development. 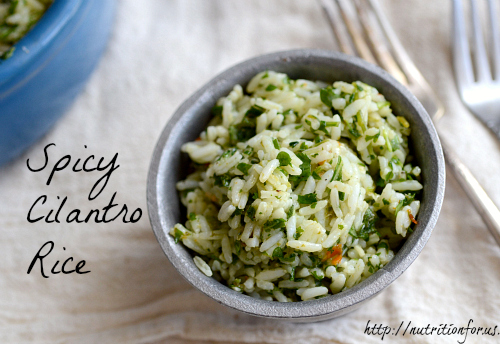 “His eyebrow just fell into the candy beans!” In addition to watching it all for the 15th time, I’m also speckling my everyday conversations with quotes, like the one I began this paragraph with. And most of the time they actually don’t make any sense to the context of the conversation. Like, Elliot asked me to help him yesterday and instead of a normal “YES!” or, more like me “Give me ten minutes” (which turn into hours), I said “I’m a scholar mother! I enjoy scholarly pursuits!” Then I threw in “A magician called Gob!” If you’ve never seen the show or just have a life that doesn’t involve watching it over and over, you probably have the same look on your face that he did yesterday. So…SPICY RICE! 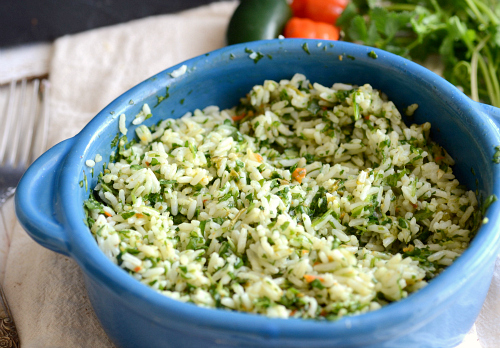 I actually made this rice before I made the creamy cilantro pasta last week (but I mean, I can’t not share a creamy pasta, right)? Although honestly, this rice is JUST as good. I’m not even kidding. It’s like the rice you get when you order a burrito from Chipotle, but spicier. Those little orange bits in the rice? Chopped habaneros. They add the perfect kick without being too hot. Like the time I forgot to deseed the jalapeños and had to use an ice pack on my tongue. 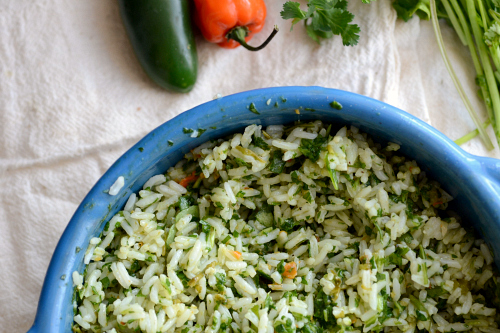 You could eat this on its own like I did just straight from the serving platter with a fork, or you could serve it with fish, in burritos, alongside your favorite chicken. It’s so versatile  And with Cinco de Mayo coming up, it’s the perfect side dish to your zesty fiesssstaaa. And while you are fiesting (it’s a word) why not invite me over? I’ll bring some margaritas!

“Even if it means taking a chubby, I’ll suck it up!” 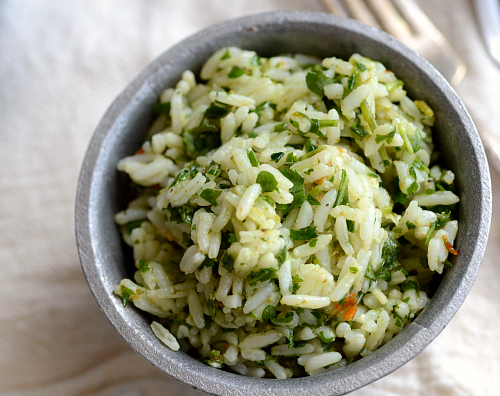