The Giving Lens Thailand: My Time at COSA

This post has been started a total of 6 times. I’ve sat down to my computer, with a big cup of coffee, on 6 identical mornings, each with the intent of writing about my short but incredibly beautiful time at COSA. And each time I’ve written two sentences and stopped. I’m not one who often struggles with words, but these ones were stuck inside of me. And when I did try to put them down onto paper, they came out jumbled, like a set of mismatched alphabet magnets on a stranger’s fridge. And instead of pushing through, I stopped. That’s why this post has been started 6 times but never finished. I couldn’t find my story amongst those jumbled words. 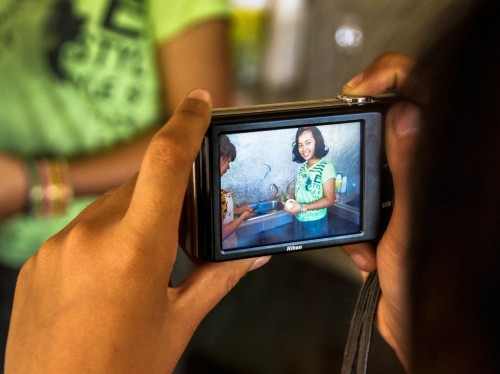 I don’t know what’s different today, but the words are mine. They are coming out in sentences I recognize. They are throwing themselves on paper faster than I can physically write them. I think sometimes you just need to give yourself time to make sense of what happened, especially after such an incredibly moving experience. You have to let the words come to you, bubble up to the surface when they’re ready, not when you are. When you’re a writer, you are at the whim of words and emotions and fear, and most of the time you have no say as to when those will be ready to convey. So, my words are finally ready and I just hope they do the whole thing justice. 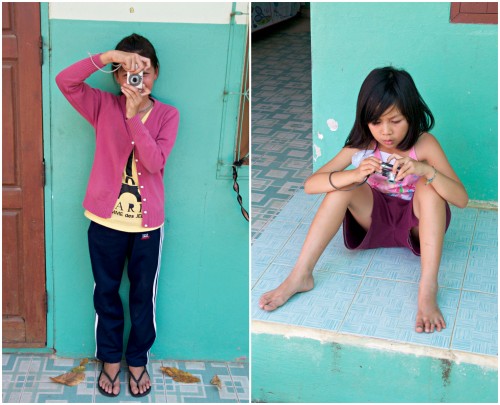 I think one of the hardest parts of getting this on to paper was that I wanted so badly to tell the stories of these girls. But when I sat down to write them, nothing came out. Probably because they aren’t my stories to tell. The only story I can tell you is mine, the one I formulated after 2 days with the girls at COSA. To many of you, that’s not the story you want to read. But it’s all I got. 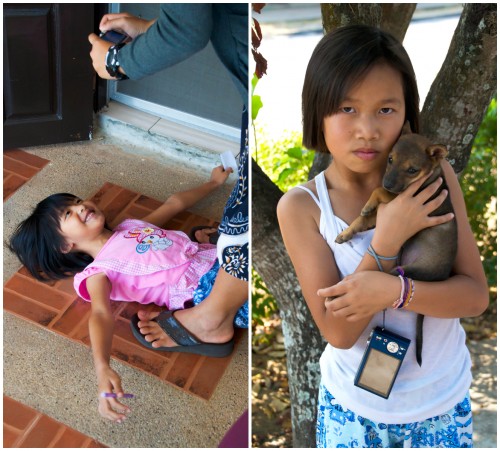 COSA is non profit dedicated to preventing sex trafficking and human exploitation in Thailand. They provide shelter to girls rescued from high risk areas of Northern Thailand (specifically the hill tribes) and give them a place to live, education and safety. It was started by Mickey Choothesa, who was born and raised in Bangkok, but later moved to the US. He made his living as a photojournalist who saw the effects of human trafficking first hand, which is what pushed him to start COSA in 2005. You can’t help but feel inspired when he talks. He puts everything he has into making sure these girls have a future, making sure they see themselves as strong, beautiful and powerful. He isn’t just the founder, he’s “uncle Mickey,” the pseudo-father to all 35 girls on campus. He loves each and every one of them as if they were his own daughters. 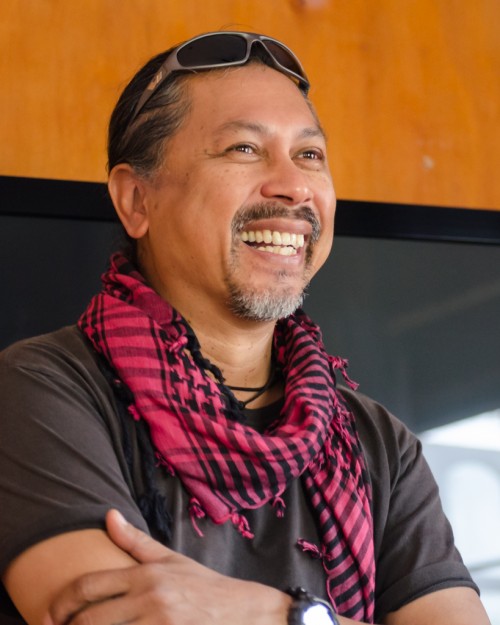 When we first pulled up to the COSA campus, I had all of these ideas as to what it would like. The rooms would be dark, the girls fragile and scared with vacant eyes. No sounds of laughter or joy, just quiet, scary stillness. What we saw was the complete opposite. All I heard was the familiar sound of pots and pans clamoring together, the dull murmur of people talking and the bursts of laughter from the girls rooms. It felt like a home immediately, which is why I think the girls are so happy there. It sounds ignorant, but happiness isn’t what I expected at a place that is home to girls who have experienced hell on earth. 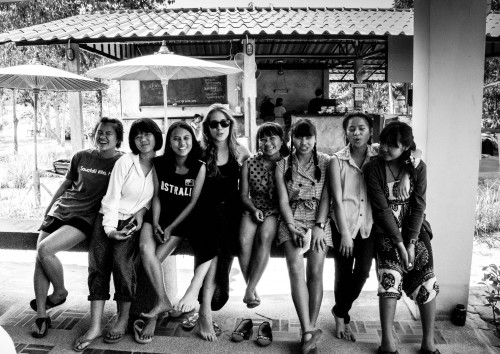 Before I get into the experience, I have to give a little insight into the project. The Giving Lens is an organization that uses the power of photography to make a difference in impoverished countries. They put together about 8 – 10 trips a year where they take teams of 7 – 15 photographers to a small & “grassroots” NGO in a third world country. The point of the workshops is to teach the children at these NGOS photography through the use of donated cameras. The main goal, I think, is to let these kids express themselves in an artistic way. To tell their story through photos they take. It’s a very powerful, moving concept and seeing it firsthand just further shows how much just one camera and one photo can change the lives of so many. Before this trip, we rounded up 27 gently used digital cameras that we could use during our weekend workshop and then donate to COSA so the girls could continue their pursuit of photography. 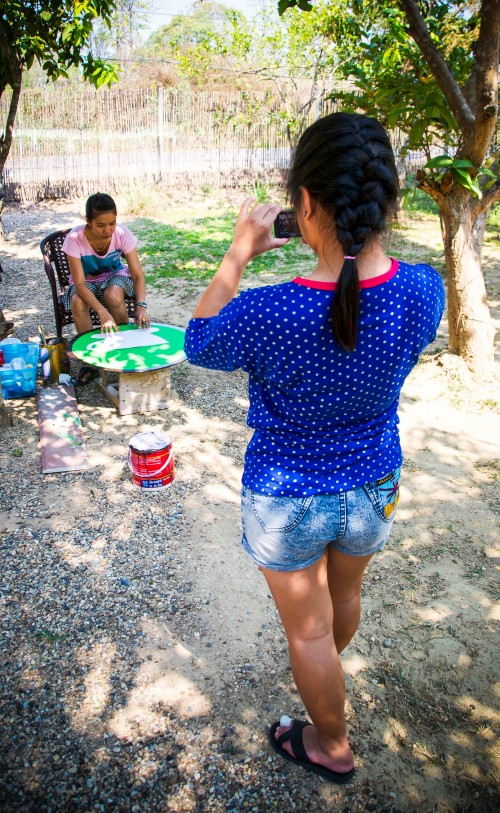 Our first day at COSA kicked off with a scavenger hunt. Each of the 7 women on the Giving Lens team was paired with a teenager who lives on campus. We gave each girl a camera, a list of 30+ items to photograph, and we tagged along as they started taking pictures of any and everything they could that matched the items on the list. I was paired with Nook and I don’t think I could have been paired with anyone more perfect for me. At first meeting, she was quiet and shy, plus a little reserved. But after about 30 minutes, you could see the shell start to crack around her. She started laughing more, jumping in front of the cameras of her friends and taking goofy selfies with Ning and Yui. After spending the better part of an hour with her, I noticed one very strong commonality between us, she felt more confidant in front of the camera. Even though I take photos for a living, I never quite feel like I belong behind the lens. 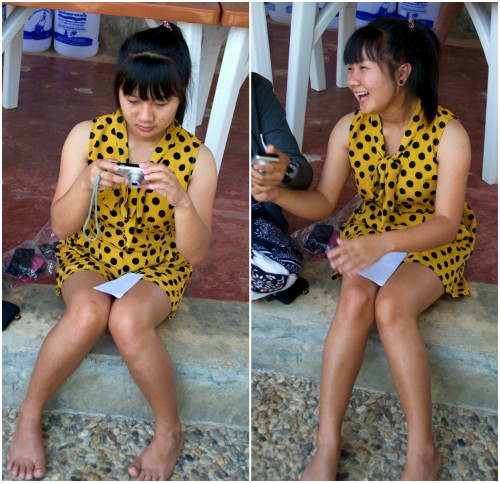 After their photo hunt, the older girls went to English lessons (which take place every weekend) and we were paired with two of the younger girls to shoot with. I was given Bow and Kanikar. I don’t think I’ve ever met anyone with a smile more contagious than Bow’s. Her face illuminates when she laughs and you feel like you’re orbiting the sun when you’re with her. Kanikar, like Nook, is more reserved, but still very caring. I could tell she was really thinking about her photographs, really thinking about the right things to say and do. It was such a difference walking with the younger girls because they wanted to take photos of EVERYTHING. They not only took one photo of each item, they took 5. Then when the hunt was over, they ran away with the cameras, filling the memory card with funny poses and out of focus selfies. I loved looking through the photos as much as I loved taking them. 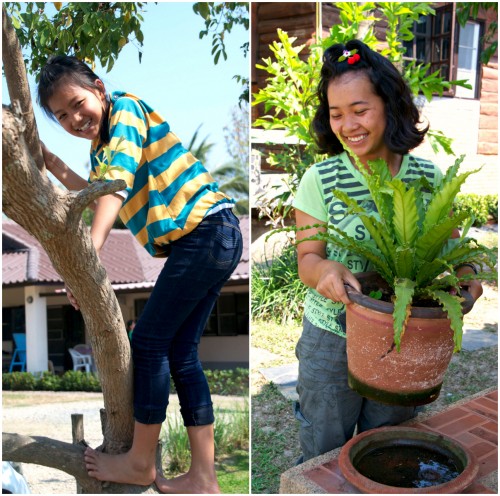 Our second day at COSA was more focused on seeing what their lives were like everyday. In the morning, we took our elder girls around the campus and adjacent town so they could show us what a normal day for them looked like. I noticed Nook was so much more interested in being the subject in photos versus being the photographer, and that’s perfectly okay. I’m pretty sure she shows up in every single one of their photos, smiling, photo-bombing, doing cartwheels. She may be shy in everyday life, but this girl comes alive when there’s a camera on her. It was fun to watch her confidence blossom when she was the center of attention for a minute. 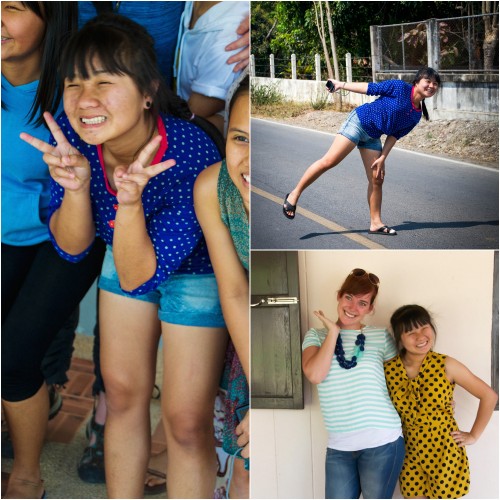 Sadly Kanikar couldn’t join Bow and myself for our second day scavenger hunt, but I think Bow took enough photos for both of them. On our walk to the temple and into town, she’d stop every 50 steps to get an up close photo of a flower or to get the disappearing shadows of the people in front of her. At the temple, she spent 20 minutes trying to get the right photo of the ornate walls outside of the door. Her eyes would scrunch and her lips would part as she concentrated on finding the right focal point and light source. But as soon as she had it, her face would erupt into a smile or laugh when she noticed I was watching her. As much as she loved being behind the camera, she radiated in front of it. The girls spotted a few young puppies in front of the temple and she loved having her photo taken with the sweet pups. Just thinking of her smile melts my heart. 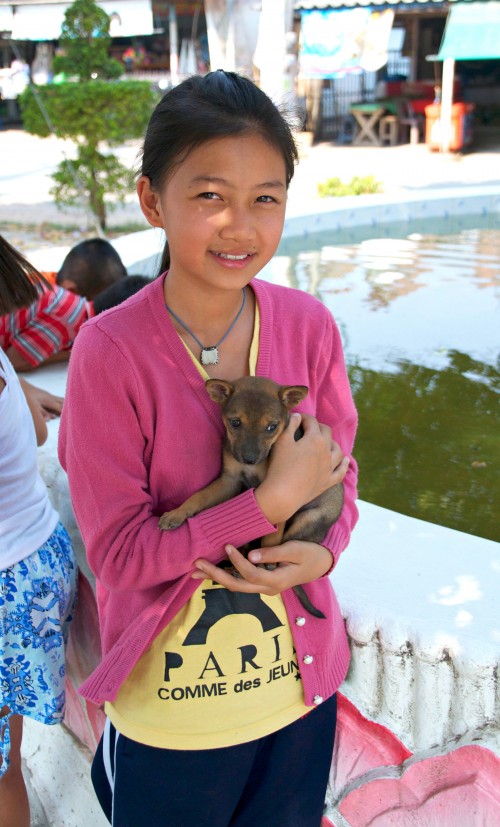 After the scavenger hunts, we spent our last few hours on campus taking portraits of the older girls. We asked them to write what they wanted to be when they grew up on the chalkboard and then pose in front of it. From chef, to teacher, to nurse and translator, these special girls lit up when they talked about what they wanted to be. It was a very raw, very emotional moment. I didn’t know whether to cry or to smile, so I did both. I like to think that our time there only further inspires these girls to chase these dreams of theirs and change the world. 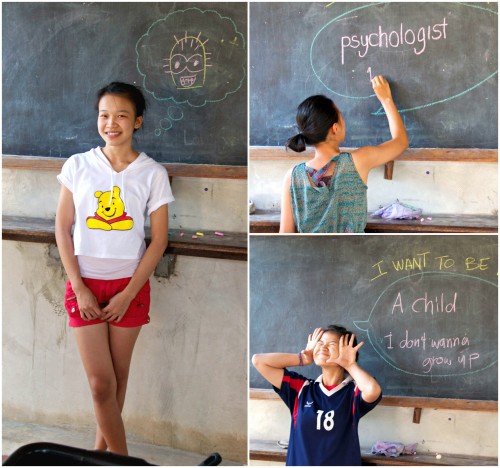 What made my time at COSA so meaningful wasn’t just the moments spent privately with Nook, Kanikar and Bow, it was the time we had with Mickey, the volunteers who spend months with the girls and the Operations Manager Steve, who gave up everything to help make this place a home. It was the incredible meals we shared with the girls that were still some of the best food I’ve ever had. 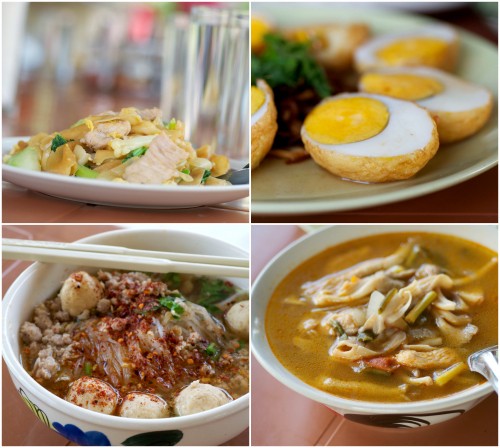 It was every gut-wrenching laugh and inside joke I shared with 8 of the most talented, gorgeous and compassionate women I could have ever traveled with. It was every beautiful picture I took with the new knowledge I learned from Kate and Nicole. It wasn’t just one thing that made my two days at COSA so impactful and meaningful, it was everything. The weekend not only changed the way I photograph, it changed the way I live. And I’ll always be forever grateful to TGL for opening my eyes and showing me the world through an entirely new lens. 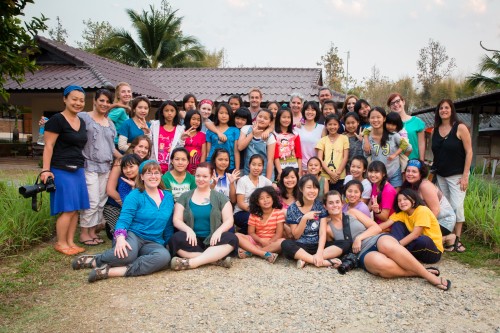